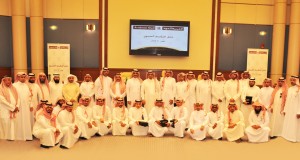 In line with its continuing commitment to strengthen corporate excellence and promote a culture of innovation and creativity, Arabian Oud, the largest specialized perfume retailer in the world and the Middle East region’s foremost luxury fragrance house, recently held a ceremony honoring distinguished employees from its various departments and branches in the Kingdom of Saudi Arabia (KSA). The honorees were cited for the pivotal role that they have played in helping position the company as a leader in delivering luxurious oriental perfumes inspired from the finest types of musk, oud and natural ingredients. The annual ceremony, which took place at the Ritz-Carlton in Riyadh, was attended by Abdullah Al Dawish, Vice President, Arabian Oud; Adnan Al Khalaf, Executive Manager; Bandar Sankora, HR Manager and other high-profile officials and managers from the various departments and branches.

During his opening speech, Abdulla Al Dawish lauded this year’s honorees, for their contributions to improve corporate performance, which has helped strengthen the company’s pursuit of excellence and development of world-class, award-winning perfumes made in accordance with the highest levels of professionalism and accuracy. Al Dawish also thanked the entire Arabian Oud team for their achievements over the past few years, as the company marked a dramatic increase in sales and customer satisfaction in 2012, supported by the development of new, high-quality products that have exceeded customer expectations.

The Arabian Oud Vice President shared that the company’s achievements over the last three decades can be attributed to the strong ties and the collaborative efforts made by employees and senior management. Today Arabian Oud has expanded into 600 branches across both regional and international markets and is driven by the company’s corporate motto, ‘A Saudi industry reaching the world.’ Arabian Oud has increased its market share, now holding over 34 per cent of the country’s SAR 15 billion oud and oriental perfume industry.

Arabian Oud has implemented an ambitious strategy that aims to increase customer satisfaction and loyalty by developing high-quality products, which in turn, also seeks to address the increasing global demand for oriental perfumes. In line with this, the company has made large investments across four large forest areas in the East Asian region in 2009, thereby ensuring the continuous delivery of the finest raw materials like oud, musk, amber and natural oils. The strategic investment has also played a key role in maintaining the competitive prices of Arabian Oud products.

Al Dawish acknowledged that the employees’ display of professional commitment and dedication, combined with the company’s innovative contributions to the fragrance industry, has become the driving force behind Arabian Oud’s success. He further commended the management’s efforts to foster human efficiencies and consolidate the culture of innovation, excellence and quality, which complements the company’s creative approach and future plans to develop innovative marketing programs and promotional initiatives that are aimed at creating new sales techniques to ensure a unique and satisfying shopping experience for the customers.

“Our ongoing achievements would not have been possible without the expertise, proper planning and hard work over the last 30 years, which has helped Arabian Oud in strengthening its presence in the local and international perfume industry. We look forward towards making optimal investments in human resources, which represents a key cornerstone of our objectives to promote customer satisfaction and loyalty while increasing our sales activities across the newly emerging international markets,” Al Dawish concluded.