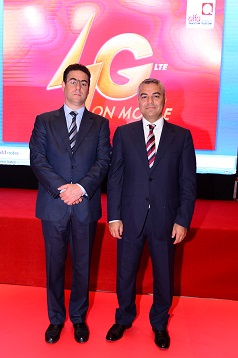 Beirut – Lebanon : Under the patronage of His Excellency the Minister of Telecommunications, Nicolas Sehnaoui, Alfa, managed by Orascom Telecom, launched 4G LTE on mobile handsets with voice capability, thus completing the second phase of the project following the launch of the 4G LTE service on tablets and dongles on May 15, 2013.

The event, which took place today at Le Royal hotel, was attended in addition to Minister Sehnaoui, Chairman and CEO of Alfa, Engineer Marwan Hayek, officials from the Ministry, members of the Alfa board of directors, the Alfa staff, and media representatives.

Hayek
The event started with a speech by Chairman and CEO of Alfa, Engineer Marwan Hayek, who said: “We promised in May 2013 at the launch of the 4G LTE service on tablets and dongles that the second phase will include the launch of 4G LTE on mobile handsets with voice capability. Today we celebrate this launch, which is exclusive to Alfa, after we were the first operator in Lebanon to launch 4G LTE on May 15th.”

Hayek pointed out that currently, there are not many phones supporting 4G LTE in the market, but gradually these handsets, will become available. He added that an agreement was recently signed with Apple for the activation of Alfa’s 4G LTE on Apple devices (iPhones and iPads) and that Samsung had promised to provide the market with more phones that support the 4G LTE technology. According to Hayek, the number of phones supporting 4G LTE on the Alfa network is on the rise and has reached today 56,000.

Hayek also said that “4G LTE coverage is expanding outside Beirut, and by the end of September our 4G LTE network will have fully covered Greater Beirut, after which we will cover the major cities.” He thanked in his speech Ericsson and Nokia Siemens, “our partners in the 4G LTE project,” pointing out that “our partnership with the best providers and suppliers in the world bears its fruits on the ground, as Alfa is a pioneer in Lebanon today.”

Sehnaoui
As for Minister Sehnaoui, he said that the launch of this service today is “the biggest proof that Lebanon holds an advanced position in the telecommunications sector, almost to par with the most advanced countries in the world in this field.” He stated that this event “shows that the news about Lebanon is not all negative and that Lebanese competencies are able to give the sector its worth.” He pointed out that “4G LTE in the world is still in its infancy and Lebanese users should be aware that 4G LTE is not available in the devices found on the market, and that we must sign agreements in order to make it available,” adding that the launch of this service today takes place through smartphones that are used in the live tests of today’s event.”

He said that with time, “the number of services available through 4G will increase because speeds are now available.” He concluded by noting that the importance of this event lies in the fact that it “puts Lebanon at the forefront of the telecommunications sector, which is a positive news this summer.”

Since Alfa wanted the launching ceremony of this service to be special, the event was an interactive one par excellence, and was punctuated by 4G live experiments that took place for the first time in Lebanon with the participation of the persons present. Smartphones that support 4G were used, such as Samsung S4, Htc1, and BlackBerry A10. The event also included a live remote broadcast via 4G technology, and a short film was shown about Alfa’s 4G project and all its phases until this day.