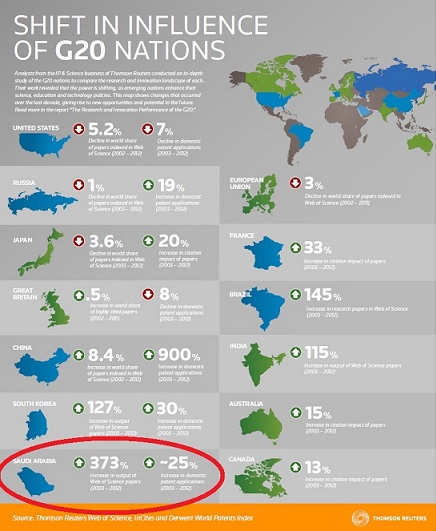 RIYADH, SAUDI ARABIA: The Intellectual Property & Science business of Thomson Reuters, the world leader in providing intelligent information to businesses and professionals, today released The Research and Innovation Performance of the G20, a report that mines scientific research and patent information across the G20 for insights into the global strategies of the world’s leading economies.

The study, which analyzed citation patterns in scientific research papers and the patent portfolios of the G20 over a ten-year-period, found that emerging markets, notably China and India, have made strides in closing the research and innovation gap with developed nations.  The research also finds that while both emerging and developed nations have dramatically expanded the world’s total research capacity over the last decade, the US and EU have begun to lose ground in total  world share of new research. The US has also begun to show declines in total global influence of its research.

From a low base of only 1,474 Web of Science papers in 2003, Saudi Arabia achieved the highest percentage of growth in output during the last decade among the G20 members with 373% of growth. Its 6,978 papers in 2012 were good for a 6% world share, up from 2% at the beginning of the period.

Much of this growth has been recent, specifically since 2009. With such dynamic growth it is remarkable that the nation also tallied a strong increase in citation impact, from about only half the world average to 6% above world average by 2012 – remarkable in the sense that racing productivity does not often add publications of the same, let alone better, quality, as suggested by citation measures.

World shares in all fields remained low given Saudi Arabia’s still small publication output, but mathematics ranked first for the nation, with a 7% share during 2008 to 2012. It was also in mathematics that Saudi Arabia posted its highest citation impact, 5% greater than world average.

Finally, mathematics earned for the nation its highest share of highly cited papers, some 1.2%. Engineering, plant and animal sciences, and computer sciences were tied at a distant second place, with just a 3% share each of the world’s highly cited papers in those three fields from 2002 to 2011.

“As the dynamics of scientific research and innovation evolve around the world, the future picture of the global economy comes into focus,” said Basil Moftah, president, Thomson Reuters IP & Science. “Thomson Reuters is uniquely poised, given our vast content, analytic tools and internal intellectual capital, to uncover such insights and provide valuable perspectives to governments, corporations and institutions around the world.”

Following are some of the key findings:

“This study is further proof of the globalization of science and innovation; it is not just a trend, the movement is here to stay,” said Gordon Macomber, managing director for Thomson Reuters Scientific and Scholarly Research. “It also demonstrates the role scientific research and innovation play within the global economy.”

“Within the G20 nations, there is a strong correlation between research activity and economic output,” said David Brown, managing director for Thomson Reuters IP Solutions. “Scientific research leads to patents, and although the patent review process can stretch up to seven years, both activities are used over the long term as proxies for innovation.”

The full report, Research and Innovation Performance of the G20, provides detailed snapshots of research citation and patent filing metrics for each G20 nation, along with a detailed commentary on key trends shaping the research and innovation agenda in each region.  Data for this report were compiled using Thomson Reuters Web of ScienceTM, InCitesTM and Derwent World Patents Index®.